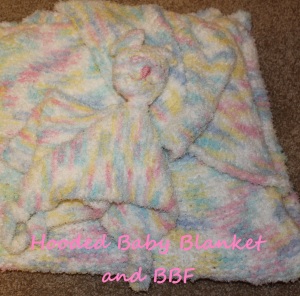 I am absolutely terrible about finishing projects. But I’ve been finishing some up recently and this is one of them.

There are sometimes when I see a cute pattern and I want to make it, even though I have no idea what I’m going to do with it after I’m done. This project was one of them. I saw the pattern in JoAnn’s. It was one of those free tear-off patterns they have in the yarn aisles. I picked it up and added it to the growing pile of patterns to be knitted (well  maybe to get knitted). Later when I wanted a new knitting project I picked it up and went to JoAnn’s looking for the yarn. They didn’t have it. Thankfully when I went back a couple weeks later they had it. I got all the yarn I needed for it. I also picked up the needles I needed since I didn’t have the right ones in my stash. I’m really not sure how long it took me to knit the blanket. I picked it up every now and then, during movies or trips. I did eventually finish and when I did I had a whole ball of yarn left. What do I do with it?

My little sister was given a “buddy” when she was little and slept with it every night. She gradually got less and less attached as she got older but when she was really little she had to have it. I though I’d look for a pattern for something like it. Her’s had a bear’s head but instead of body it was attached to the center of a mini blanket and had “feet” on all four corners.  I was originally thinking of doing a little bear but I found a pattern on Ravelry for a bunny and loved it. I had never made anything with double pointed needles so I wasn’t sure how it would turn out. But it ended up great. It was so fun knitting and seeing the head form and then the ears. The cute little knotted feet on each of the four corners are so fun. My least favorite part of the whole project though was embroidering the face. It took me several tries to get it right but I love how it looks.

So know that you’ve read my whole long explanation of how I made mine, here’s some pictures and the details for if you decide to make one.

Pattern: Blanket with Hood by Bernat (Link goes to a page with a download link for the pattern.)

Yarn: Bernat Pipsqueak Baby Baby Print (I got mine at JoAnns.)

Notes: The pattern calls for size 9 knitting needles but I wasn’t able to find size 9 in the right length so I went up a size and got size 10. It worked fine and the knitting is close enough, no holes or anything. This may have been why I only ended up need 5 balls (600 yards) vs. the 660 yards the pattern called for. I even had enough yarn left over from the fifth ball to sew the hood onto the blanket. 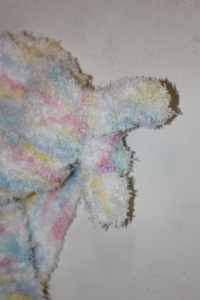 Yarn: Bernat Pipsqueak Baby Baby Print (I got mine at JoAnns.)

Clover Bamboo Double Pointed Needles 7″ Size 6 (Pack of five needles, can’t do it with four, used to knit the head)

Notes: The pattern only called for 105 meters which is 115 yards. I ended up having to buy another ball of yarn because one ball (120 yards ) was only enough to do the blanket portion. I used the new ball to knit the head and didn’t use very much of it. I estimated that I used 150 yards for the project total so plan for somewhere around that. I used a crochet hook to help in picking up the stitches for knitting the head. Because I had never done this I looked up how it was done. I found a blog that had some very useful videos on knitting in the round. View the playlist of the videos here. I was also unsure of what backward loop cast-on was. Found out here.

These two projects were so much fun to make, especially the BBF. Bernat Pipsqueak comes in really cute prints so you could create so many different ones. You could also make these out of different yarns. I’m finishing up another baby blanket from a real pretty pattern and am going to make a buddy to go with it. Hopefully that’ll be finished soon!

When I started this project I didn’t have anyone in mind to give it to, but by the time I finished it I did. A friend just had a baby girl so I gave it to her. Hopefully she’ll get a lot of use out of it!